Big news from Loliondo – Tanzania’s Director of Public Prosecution will drop all charges of murder and conspiracy to murder against 24 members of the Maasai, including 10 of the tribe’s leaders.

The leaders were first accused back in June 2022, following a series of clashes between the Maasai people and Tanzanian security forces over the illegal seizure of Maasai land. Security forces, earlier in June, as well as authorities from the Ngorongoro Conservation Area arrived in Loliondo and began forcefully, and illegally evicting members of the Maasai people. No notice, compensation, or opportunity for investigation was provided. The security forces seized 1,500 square kilometres of ancestral land claimed by over 70,000 Maasai people.

The Tanzanian government claims the move is in response to the concerns over the growing population of the Maasai community and its effect on the wildlife in the region. Increased tourism to the Serengeti has generated massive amounts of income and driven up competition for land around the national park. In 2009, thousands of Maasai were displaced, the land sold to an Emirati hunting and tourism company. The deal eventually fell through because of corruption allegations.

Following the June evictions, members of the Maasai from Ololosokwan, Oloirien, Kirtalo and Arash — four villages in Loliondo that border the Serengeti National Park — gathered to peacefully protest the theft of their land. They were met with violent counter-protests and police aggression, resulting in chaos and bloodshed.

During the protests, 27 people — 10 Maasai leaders from Loliondo, 14 members of the Maasai, and three others — were arrested, detained, and denied access to their lawyers and families before arraignment in court. A policeman, Garlus Mwita, was killed by an arrow, while 84-year-old Maasai community member Orias Oleng’iyo was disappeared. At least 32 members of the Maasai also suffered gunshot wounds.

WAMIP and its partners support the Maasai People and their right to peacefully protest the illegal seizure of their land. WAMIP condemns the Tanzanian security forces for their unlawful and violent actions during the protests and subsequent imprisonment. Justice for the Maasai! 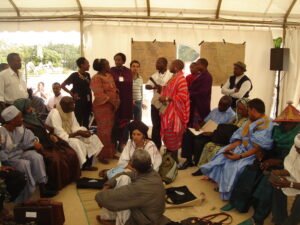